I Finally Got My Bike Put Back Together

Way back in January I wrote about getting my road bike tuned up for the season. Shortly after that we got a huge snowstorm that delayed my plans, and then I started riding my fixed gear bike instead.

As a result my good geared road bike sat about halfway put together for almost 2 months. At the end of March though I finished my mash tun project and while I was in a project mood tackled the road bike too.

I set up my work stand at the top of the driveway and cleaned and greased everything that still needed it. I reinstalled the cranks and put the new chain on. I finished adjusting the brakes, adjusted the derailers, and bent the front derailer cage slightly to accomodate the slightly shorter spindle in the new bottom bracket. That bend probably only put it back where it should have been in the first place and it works better than ever.

After all the mechanical bits were ready I spent an hour or so nicely wrapping the bars in bright yellow tape, and then finished the tape off with tightly wrapped twine. It looks great. 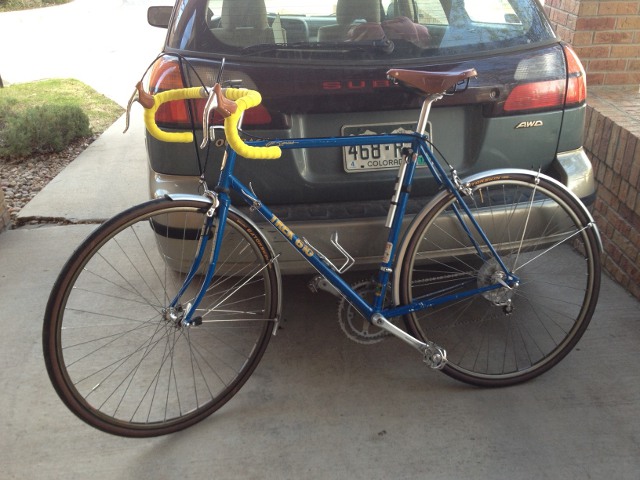 I’ve been on two decent rides since, and it’s smoother than ever. Eventually I may do some more work on it, such as installing a new drivetrain and new wheels, but for now my trusty Trek is ready for another year or two.