As I wrote two weeks ago I had a couple of rough months. My weight loss stalled and I hardly rode a bike at all. Since then I have worked to make up for the lost progress. But despite the level of effort I have made it hasn’t really felt like work.

Maybe that’s the biggest gain I’ve made since I started running back in 2012. An individual run like this morning’s difficult set of intervals may be hard, but four runs a week is part of my life now. I feel bad when I don’t run. I’m happy to get an early start on weekends and spend an hour out on the trail.

Now that I’m back in Denver I have access to my bikes again too. Both my Trek road bike and my Schwinn single speed are all tuned up for riding this summer. But because I was traveling for most of spring I hardly rode at all. The chart I use to track my 2014 goals showed steady running progress but only slow sporadic progress in cycling. At least until late May.

Since I got home I’ve made an effort to ride more frequently. The days are long this time of year. I can easily fit 10–20 miles in on a weekday afternoon, and many more on the weekend. My milage went from a near flatline to rapid increase. 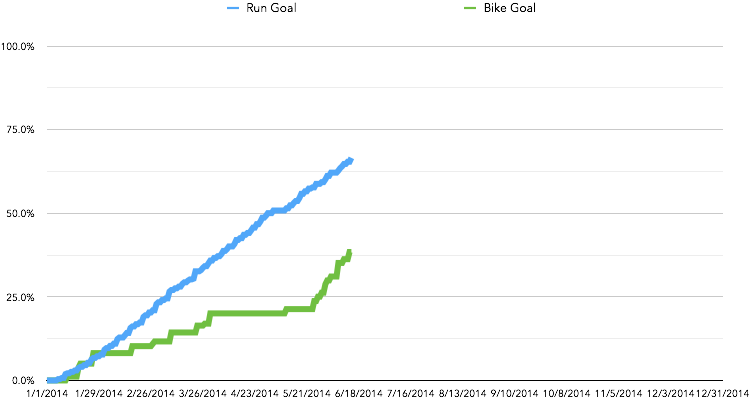 To add to this, I’m eating better now that I’m home. I have access to my food scale, a full kitchen, and no need to go out for meals all the time. I lost two months of progress, but my weight trendline is moving downwards again. I’m nearly where I was before I started traveling back in April. I’m disappointed that I lost time, but happy that I can start making up for it. With a little luck and much hard work I’ll be under 200 pounds by late July.

And I’m in the best shape of my life.