It’s been a month since I wrote anything, so I thought I’d put together a little ski trip report and summary of what else happened in February. Other than the ski trip it was a pretty ordinary month, just snowy. Not a lot of cycling, but I still kept running.

The fun part of February was the ski trip I took with my friends Alex and Danielle and their friend Kat. We booked a 3 day trip to Whistler in British Columbia. This was my first time there, and my first time skiing outside the US.

Since Alex and Danielle live in Seattle, we gathered there. I flew in on Friday night, and on Saturday morning I went for a fast run in the winter rain. I’m noticeably faster near sea level than I am here in Denver, which is fun. I also ran with a bunch of army guys for a while, which was also fun.

Around noon we packed up the Jeep and the Maserati with all our ski and snowboarding stuff and headed north to Canada. Alex, Kat, and I rode in the Maserati, and Danielle generously drove all our gear in the Jeep. The border crossing was easy, and the drive through Vancouver and up to Whistler was quite pretty. I’d love to go that way in Summer.

Unfortunately it has been an oddly warm winter in the west, and there was no snow in town. Conditions on the mountain were spring snow at best, and only above a few thousand feet. Nothing we could do though, so we skied and boarded the heck out of the place anyways. On the first day we went about halfway up Blackcomb and mostly stayed frontside. It was warm and wet, and I had trouble staying in control. My skis like to go fast, and they really go fast in wet slushy snow. After a while I headed up to the top of Blackcomb, but the runs I felt comfortable with were crowded. The first day was beautiful, but it was frustrating compared to the skiing I’ve had in Colorado this year. We ended the day with a few beers and some great steaks, so all was not lost. The second day was better. I headed straight up Whistler and spent all day in the Harmony and Symphony areas. Harmony was two groomed runs, a green and a blue, which gave access to a huge open bowl of varying difficulty. Symphony was a mix of an open bowl and a variety of treed runs. I started pushing myself and took a number of black runs. Other than the constant rain clogging up my goggles it was really amazing. Sure I was only using a tiny part of a huge mountain, but it was a tiny part with low traffic and great runs. 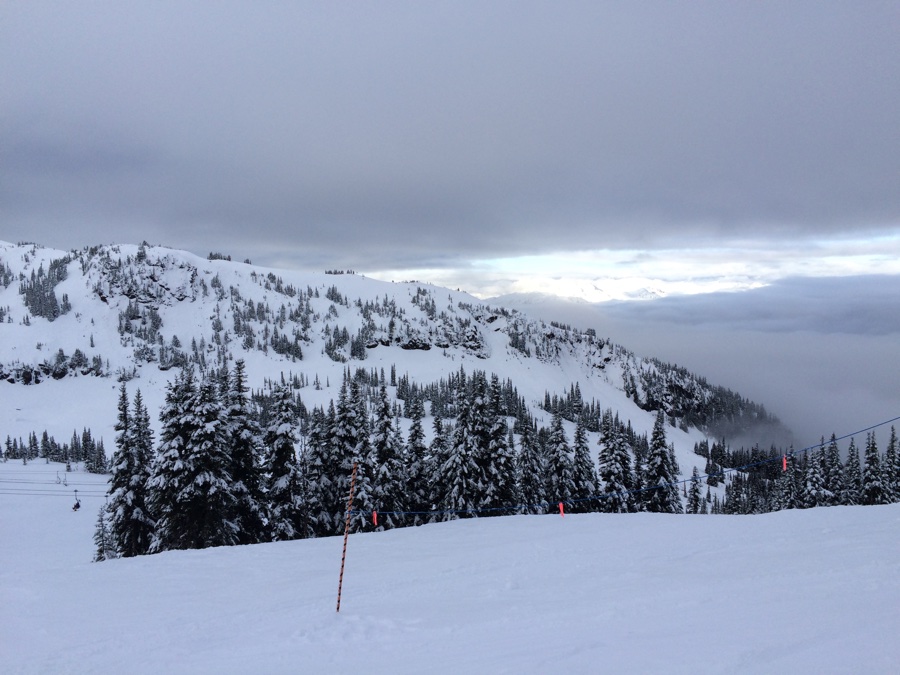 I was pretty much wiped out after two days on my skis, but I still tried to make the best of the third day. I went back to Harmony and Symphony for a long while, then after lunch got in one more long, long run to finish out the trip. I wish the snow had been better, and that we had a winter wonderland in the village. But you can’t control the weather and I still had a wonderful time. I’m glad Alex invited me and I’m glad I made the trip. I hope we do it again in the future. January had a lot of nice weather, and I tried to take advantage of it and get a few bike rides in. February also started nice, and I did one long weekend ride, a big loop of the south part of Denver. But since the ski trip we’ve had snow and cold. I kept running but didn’t do any more riding.

What’s kind of amazing is how Denver, which gets plenty of snow in late winter and early spring, always seems to freak out if there’s any storm. Forecasts predicted anywhere from 8 to 16 inches last weekend, which honestly isn’t all that much when the streets are clear and the city has equipment to handle it. But the night before the snow started you would have thought the end times were coming. I was out of food so I stopped by the grocery store after work on Friday. It was a zoo, and almost all the meat was gone. You wouldn’t think it hard to find chicken breast in a modern American supermarket, yet there was none.

You’d think people would stock up on staples and not perishables if bad weather was coming. And of course this is Denver, and it was not the storm of 2007. The streets were OK on Saturday and fine by Sunday.

Then this week we had two good solid snowfalls. The first hit hard mid-afternoon on Wednesday. It snarled up traffic in the evening and give me a wet and soggy run and some car dodging as people jammed up the intersections. We got about 2 more inches on Thursday. I mostly don’t mind the snow, but people drive dangerously and put pedestrians at risk in bad weather. At least I don’t have a commute.

It also can make running hard. I’m thinking of getting some of those running Yaktrax for days like Thursday where I couldn’t get good traction for my interval sets.