I started running last winter, and shortly after the new year I got serious about calorie counting again. For a while I was up and down, especially in March when I spent the whole month either sick or traveling. But since April I have been very serious about things, even if I am not perfect in the day to day.

It can be hard to see the progress while it is happening. I don’t feel particularly fit nor that I am all that much thinner. Progress is little by little, and what stands out most is the day to day fluctuations on the scale. Longer time periods are fuzzy. I need external signals to help highlight the changes.

As an example I went on a run tonight. I ran a little more than four miles. Two of those miles were relatively slow, and two were relatively fast. It felt hard, and I felt like maybe it should have been easier. But if I go back and look at my progression over time, it’s obvious just how far I have come. If I just think back to my first 5k in February it’s clear how different things are.

It’s the same with my weight. I don’t feel particularly different or thinner than before. But when I chart the data over a longer period the change is both obvious and steady. Everything is going fine. And today I wore a shirt that hasn’t fit in years and it was perfect. I don’t see it, but it’s there.

Here’s my progress so far. 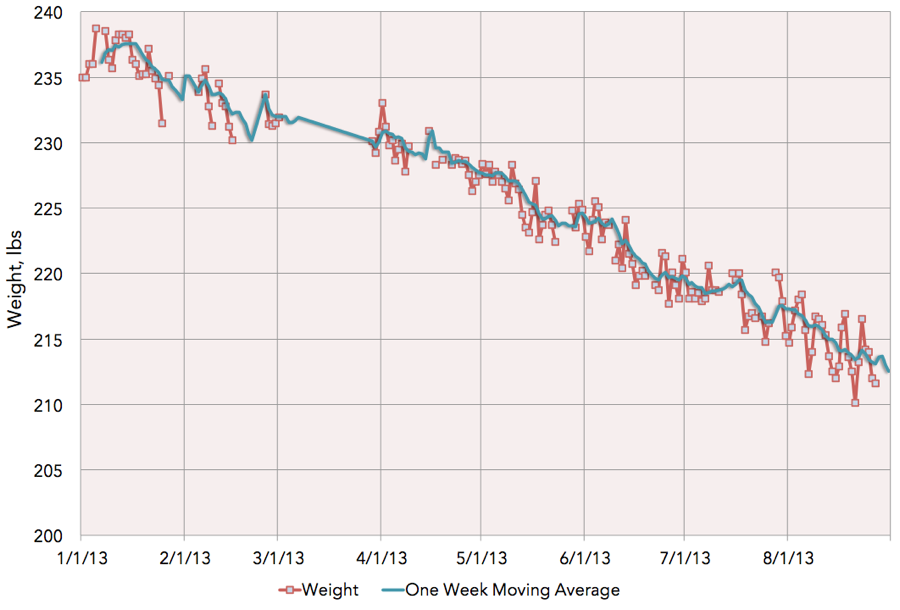 I still have a long ways to go. The last time I tried this I made it to about 200 and stalled. And I later lost all that progress. This time I have to do better. I know I can. It’s just a matter of motivation and dedication.