As I have posted before I started running last November and have managed to turn it into a habit. From 3 days a week I’ve pushed to 4, and have been steadily improving both my speed and distance.

My first 5k was back in February, and then I did several more. None were official: I was timing myself based on my phone’s GPS. Eventually I was able to do a 5k run at a 10 minute pace, one of my major goals. In my post discussing this, I concluded that it was time to enter some official events and get some official times.

In May I signed up for the 10k run at the annual Midnight Madness road race in Ames. I was going to do the 5k, and made the choice for the longer run at the last minute. I felt like I needed a new goal to keep training and improving, and a 10k seemed properly ambitious.

From there it was time to train, a lot. When I signed up for the race my longest run was under 4 miles. Shortly into training I failed to reach 4 miles more than once. But in the 2 months I had I slowed down a little and steadily increased my distance to 4, then 5, then 6 miles.

By a few weeks before the race I was running at least a 5k four times a week, and thinking of a day where I “only” had to run 3-4 miles as an easy day. What a huge change from when a 3 mile run was a distant, difficult goal!

Eventually I ran a 10k in training, about 3 weeks before the race. I did it in 67 minutes, and felt like I had enough to go slightly faster. I set a personal goal of running the race in under 65 minutes, breaking the 10:30 pace barrier for over 6 continuous miles.

That was my goal, and although I was nervous I was sure I could do it if I just pushed on. It helped that I had so much support from family and friends, and that my mom, older sister, younger sister, sister’s boyfriend, Ben, and Sam were all running too. It wasn’t just me out there, it was an event filled with family and friends.

On the night of the race I watched the 5k, cheering on my friends and family with my dad and little sister. I watched Ben and Sam cross the finish line of the 5k, though they were blurry streaks on my camera. 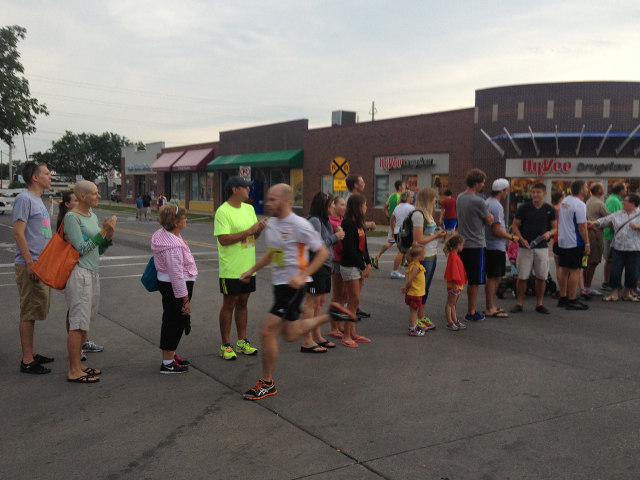 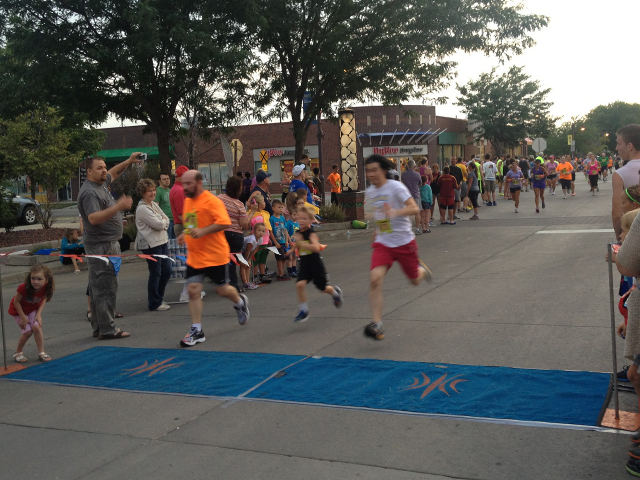 Shortly after I found my way to the 10k starting line, standing with my little sister and her boyfriend on one side. I was nervous, but her enthusiasm helped tamp that down. Sam was there too, but I missed Ben.

Then the gun went off. We all started running, and with one last squeeze of her hand I watched my little sister take off with her boy to run a much faster race. Within a mile I dropped from the middle of the group to farther back, but in my headphones the pace coach I had set up said I was doing fine. I was a little ahead of my target time.

The Midnight Madness 10k is two loops of a 5k circuit, and shortly before the halfway point the fastest runners were passing me on their way to 30 minute times. Meanwhile I was building a slight lead on my personal target, just in case.

When I got to the last turnaround, at the 5 mile mark, my pace coach tried to get me to speed up, to go from a 10:25 mile to a 10 minute mile. I managed for a while, but the long uphill was too much. I was losing ground. Soon I was closer to an 11 minute mile, and feeling tired. At the top of the hill I was 30 seconds down on the last mile’s time, and losing all the margin I had built early in the run.

We came over the last bridge, and I could see the finish line. On the left were two of my closest friends cheering me on. On the right was my family, cheering just as loud. I could hear the announcer calling out times. 63 minutes. I was almost a quarter mile away.

I pushed hard, as hard as I could with what I had left. 64 minutes. I heard my friend Beth’s name called out. I kept running. Crossed the line.

Then my name. Then 65 minutes.

The official times were posted the next day. Confirmation.

And the next one will be faster.