Welcome to the third regular installment of “am I making progress?” For the curious I have links to updates from January and February.

I am mostly on track to achieve my goals. Three months in and I’m ahead of my running goal, on target with my weight loss goal, and only a little behind with cycling. I finished training and ran the half-marathon on March 22 — in dismal weather. I included a brief race report near the end of this post.

It’s March in Colorado, which means wild swings between sunny and 60s to snow and cold. But we are trending towards warmer more springlike weather. Most of the bad weather seemed to hit on weekends. My first run of the month was an 11 miler in 15 degree weather, and the next weekend I ran 12 miles through snow and mud on another chilly Saturday. As a final touch race day was cold and windy, with light flurries.

But there were good days too. Enough for more bike rides and a chance to catch up on my riding goal. I’m still behind — I should be at 25 percent — but I can make that up over a few nice weekends. It may even be getting warm enough to start running in the morning instead of after work, assuming I can wake up early.

Now that my race is past I’m not training for anything specific. I will run the Bolder Boulder 10k in 8 weeks, but I decided to just run it without a specific plan. Instead I am working through a more general running plan with a mix of long runs and intervals aimed at increasing speed and overall fitness. I wanted some structure on the calendar; a plan to keep me motivated. I should run plenty of miles in April and May.

March was good for weight loss, with the trendline showing 5 pounds gone since the start of the month. Some weeks have been better than others but overall things are going well. I had to buy new jeans and a new belt, and I need to go shopping for work pants too.

I also did my first hike of the year — a trek from Chautauqua Park up to the first flatiron in Boulder. I wrote about the hike earlier this month, including some pictures.

I planned to write a separate half-marathon report, but didn’t get to it. So here it is as part of the monthly update.

I’ll start with how I got here. I finished my first 10k last summer at Ames Midnight Madness. After that I kept going, trying to finish a bunch of runs on the 10k training plan that I hadn’t completed before the race. That kept me busy through August, and coasting through September. But my run distance in September and October dropped to about 2/3 of what it had been before the 10k. I worried that I was going to start skipping runs if I didn’t have a target to aim for.

So in mid-November I lost my mind and signed up for a half-marathon. It seemed like the sort of challenge that could keep me motivated, and be difficult but achievable. I chose a smaller race up in Golden, both because of the timing and its size. It only had a few hundred runners each of the last two years, and I felt like the pressure would be less than a bigger race.

I started in on a basic 16 week plan in November. I took something of a break in December, but started back up in earnest in January, after I recovered from a bad cold at the start of the year. I progressed to longer and longer runs, eventually making it through 12 miles 2 weeks before the race.

I pulled back on the distance after that, hoping to recover some strength after all the conditioning work. My long runs had been at a relatively slow pace, with some faster intervals mixed in. Estimating race pace was difficult, since I had never run that distance before. I hoped I could sustain an 11 minute average mile, which would put me at 2 hours and 24 minutes, while my overall “must achieve” target was 2 hours and 30 minutes.

My Dad and younger sister Annie drove out to Colorado to be my support team. Their decision to come was a late one, but made me happy. Annie has been a big supporter ever since I started running.

Although the day before was warm and sunny, race day was cold, windy, cloudy, and generally miserable. The weather report showed 28 degrees before the race start, and I don’t think it got any warmer in the two and a half hours I was on the trail. 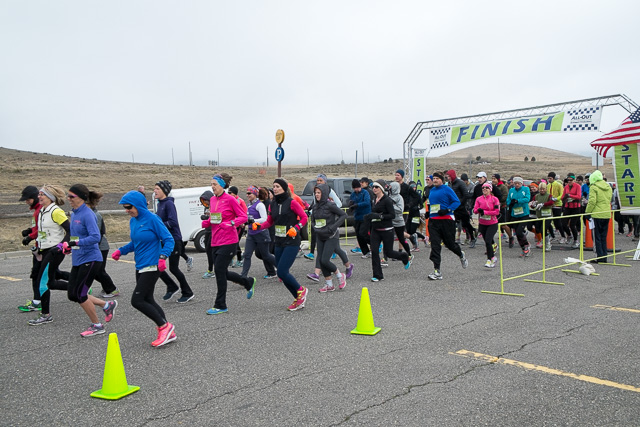 The first 5+ miles of the course were downhill, and during this portion I was feeling great. I settled into what felt like a nice easy pace at under 10:30 a mile. Which I held with no struggle until the out and back turnaround. Looking back it might have been smart to go slow on purpose at the start to save more energy for the long uphill.

Except for one steep descent, the rest of the race was a long uphill slog. Shortly after turning around I slipped back to 11 minutes a mile, which I held through mile 9 of the course. Somewhere around that point my dad and Annie found me, and I got a quick hug from her before moving on to the really hard part. 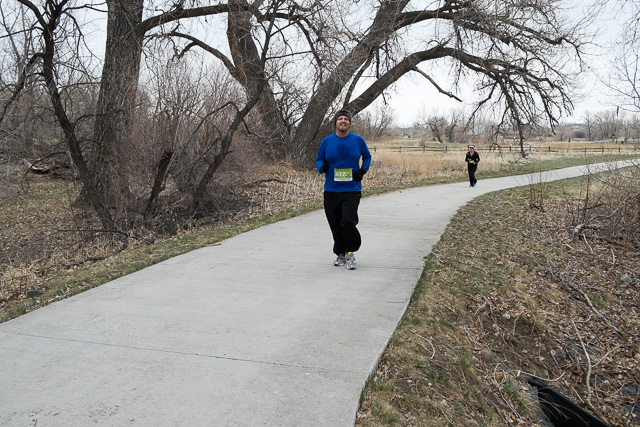 The last few miles of the course were a loop around the north side of a big reservoir. The trail around the reservoir climbs a couple hundred feet up, well above the lake. Where the previous few miles had been a steady gentle climb, the slope increased sharply up to the 11 mile mark, and I slowed way down, closer to a 13 minute mile. I started walking on the uphill because I couldn’t keep my heart rate from running crazy even at a shuffle.

By the time I hit the huge downhill on the west side of the lake I was pretty much completely wiped out. I got down the hill quickly, but the last mile and a half were uphill again. I was struggling hard at this point. Some quick math told me I wouldn’t make 2:24, but that I should have no trouble with 2:30 as long as I kept going. Dad and Annie found me again on the far side of the lake. That girl can yell. 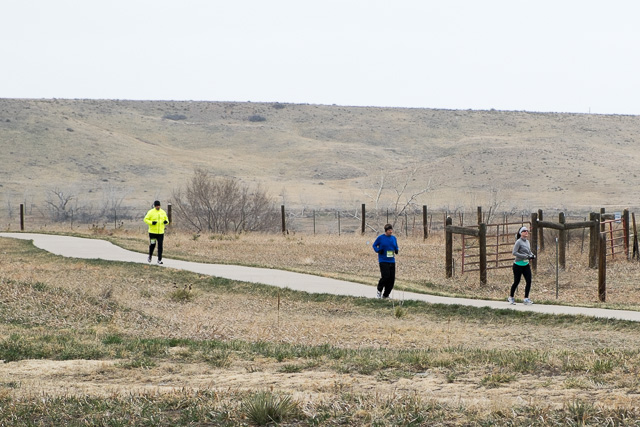 I finally struggled up the last couple of hills and crossed the finish line. My official chip time was 2:28:08, at an 11:19 minute/mile pace. The gritty details are all on Garmin Connect, though I didn’t stop my watch until almost a minute after crossing the line. 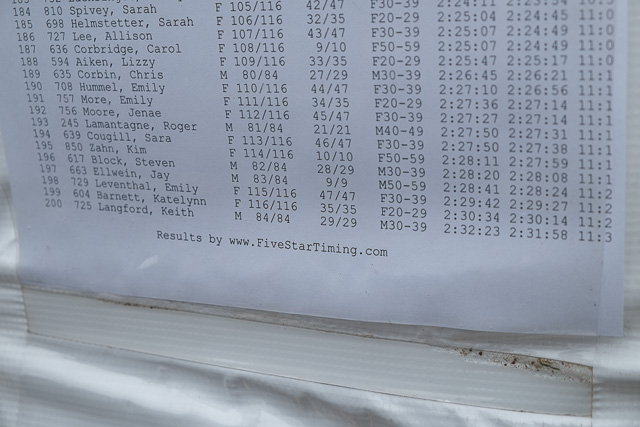 I was completely wiped out at the end and it was a couple of minutes before I could really talk. And it was still cold and windy. My torso was cold and my hands were going numb and a golden retriever stole my breakfast burrito. 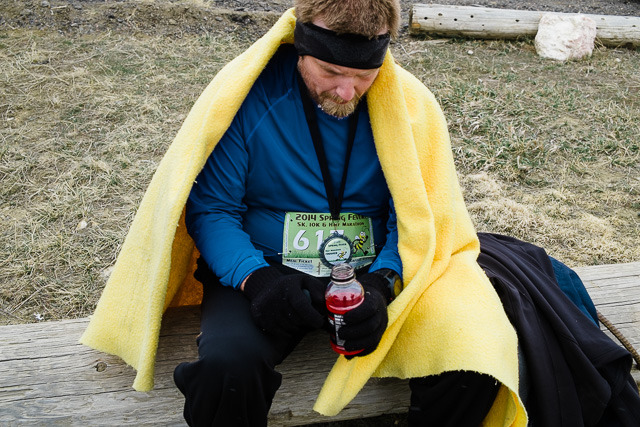