Over the last few years I’ve taken to using RPN for general calculations instead of the more common algebraic notation.

I have an HP 35s which is supposed to be at my desk at the office, but is currently at home. I’ve taken to using the truly excellent PCalc for iOS for general calculation where I don’t have the HP calculator, but I also use an HP 42s calculator simulator called Free42 on Windows when I’m at the office.

Free42 isn’t an emulator as it doesn’t use the actual HP roms, but it is an accurate simulator of the calculator. The standard skins provided on the project page generally make this very clear, as most are based on photographs or scans of the HP 42s calculator itself. These aren’t bad, but I’ve really taken to the more modern, flat styling used in the PCalc Samurai theme. I want the functionality of the calculator, but don’t much care for trying to emulate the look of the actual physical buttons.

So I created my own skin for Free42 based shamelessly on PCalc’s Samurai theme. It’s a bit ugly because of my limited options for font choices (and limited skill), but I’m a lot happier with it than any of the themes provided on the developer’s site. 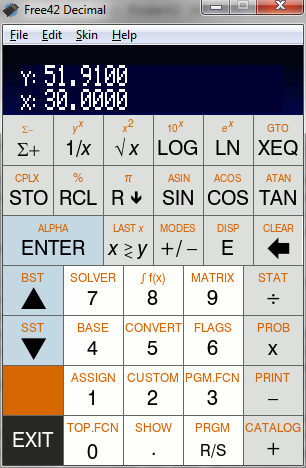 If you use Free42 you’re welcome to download it and give it a try.