Can I Tell You a Story?

And there’s this girl. She’s not my girl but she’s someone’s and she’s so important.

Maybe an introduction, first. When I was in college Stomping Grounds, formerly a coffee shop and later a cafe, was a common place to find me. I had friends, like Andy and Jess, who worked there. And for a while on a dark night in Ames it felt like the best place to be.

Some nights I would order tea, some nights coffee, beer, or wine. Some nights we’d sit outside at a table in 40 degree weather drinking wine and talking about god-knows-what. Glorious.

Some days I would just sit outside for hours, buying the occasional drink and whiling away the time with a book. And in a town the size of Ames it was common to run into people you knew.

I’d been with Andy through phases with and without girls, none of whom I knew, but I could gage him by his moods. It seemed to me that things were hardly great. Andy worked at Stomping Grounds and he met this girl there. The important one. Lindsey.

And he was clearly, oh so clearly, smitten by her. Magic.

I remember how his moods changed after they started dating. How it almost seemed like I had a new friend; a new Andy.

I remember stories like their late night drive to the middle of nowhere. 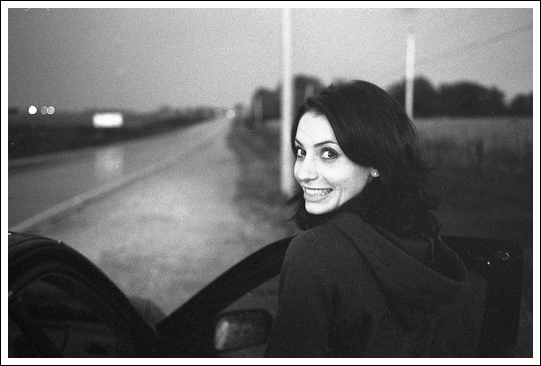 When a friend you care about as much as I care for Andy is this far gone, you start getting curious. At least, I do. She worked at Stomping Grounds too, and I’d met her but never really talked. But I knew who she was and she knew who I was and we chatted; awkward small talk I think.

But getting back to the night where I started this whole thing. I don’t remember all the details, but one thing stands out clearly to me.

I was sitting near the window. Lindsey was my waitress, and it was a beer sort of night. I ordered a Young’s Double Chocolate Stout. The one in the purple can. And when this girl brought the can and a glass to my table she popped the top and poured it straight to the bottom of the glass, hard.

Now for many people and many beers, this is absolute anathema. You simply do not pour a beer that way. But she knew, bless her, that a nitro-charged can was different.

This girl is a keeper.

Does this matter? For the beer, yes. For life, I think so. Truly? Cross your heart? Probably not. But it struck me, and the years that have followed have been good ones.

You guys are special to me.